I went out for a ride on New Years Day. it was jolly good fun except 10 minutes ride away from the car park, bugger knows what sort of plant life I rode over but I ended up with a puncture.

It was a slow-ish puncture and I did initially hope to just put a bit of air back into my rear tye and pedal quickly to the car and fix it at home. So I stopped and got my pump out and after a couple of goes on the pump I realised that I would have to change to inner tube. A couple of minutes later with the wheel back in place I turn the bike the right way up and notice the front tyre is now flat. Gah!

So as you can see from the picture, two out of three tubes have a few patches now and on of them and err, well yes. Time for some new tubes. The left tube is my spare tube and will be going back in my bag. 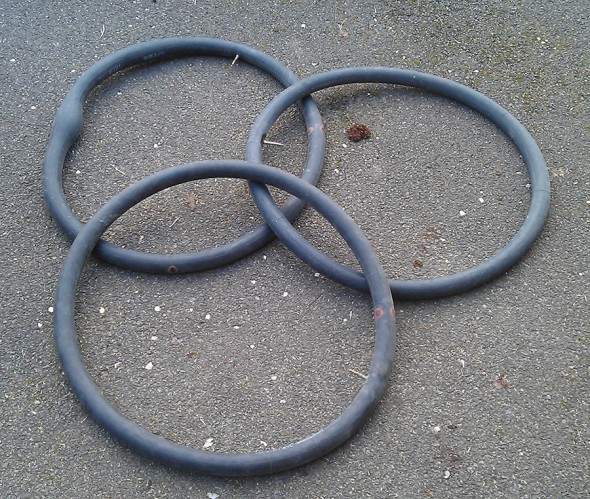 I went to Halfords and spotted these dangling Slime Smart Tubes dangling from the rack.

They have ‘stuff’ in them that plugs holes upto 3mm, apparently. They don’t look any different, as you might guess, and uninflated you can squish the goo about inside them. They’re noticably heavier than regular inner tubes, but it’s not going to make any difference to me. It may to you, but my bike isn’t a light weight carbon flashy ride. At nine quid each, I thought I would give them a go as they seem a bit of a half-way house between tubed and tubeless and prevent me from having to stop in the mud so often.

But there again, I might just have thrown £18 away. We shall see.