I’ve been out cycling a couple of times this week. I tend to go in fits and starts, especially in the winter. Sometimes every weekend for a month and then nothing for a couple of months.

On Sunday us and the neighbours went for a family ride around Culham and the back of JET It’s a nice 3.5 mile, mainly hard standing, with a little bit round the edge of a field at the start and end. If you go anti-clockwise there is a short, fairly sharp incline that smaller kids may need a hand with, and quite a long downhill section after that. The rest, though is flat and ideal for younger cyclists that can ride but need to build up their confidence.

As it’s a couple of miles from our houses, the wives and kids travelled by cars to Culham and us two ‘men’ pedalled our way there.

On the way back though, we thought, instead of going straight down the A415 into Abingdon and out the other side and home, we detoured down Tolgate Road and across the bridges over the river, to see what the state of the river was. The Thames had burst it’s banks recently and, well it looked like the Mississippi, it was that wide.

After ogling the swollen Thames (ooh er, missus) we carried on into Sutton Courtenay and out toward Drayton.

There’s a shortcut to our side of Abingdon from Sutton called Peep O’ Day Lane. It’s a paved byeway (or whatever), part of a cycle route to Oxford from somewhere. We turned in to it and came to a stop. 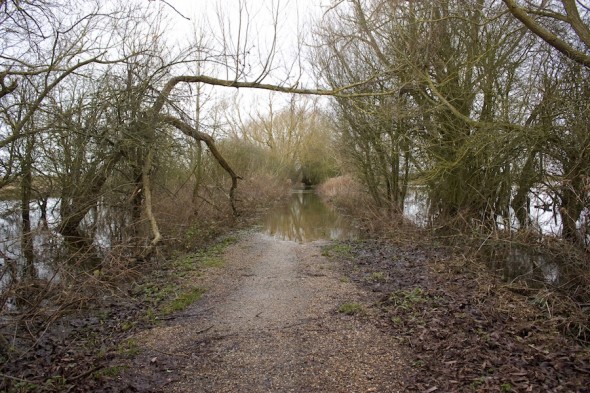 Do we? Don’t we? How deep will it get? We reckoned it would get about a foot deep, which wouldn’t be a problem. The bit I was worried about was dropping off the side, as either side of the path is a drop of about 2 foot, more in some places, along with obligatory decrepit barbed wire fencing.

We went for it. We hit the water and within a couple of turns of the pedals, the water was 2 foot deep, sloshing over the forks, a steady ‘slap-slap’ noise as our pedals plunged in and out of the, frankly, bloody cold water. 300 metres later, we come out the other side, quite pleased with ourselves.

This may not sound like much of an achievement, but I didn’t realise how much resistance 2′ of water would have and it is quite unnerving not to be able to see where the road is. There may have been trees and a few bushes either side, but they are the other side of the path but they are not right at the side, as I said there is a drop immediately either side of the path, and they greenery is closer to the path is some places than others, of dropping into 4 or 5 foot of water was a very real possibility.

The second time has been New Years Day. My brother-in-law and I went to Cheively, near Newbury and pedalled our way round 17 miles of mud. 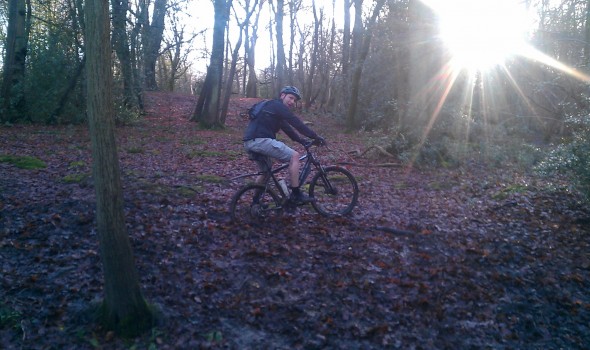 Careering down the side of a bloody great hill and break neck speeds or carefully picking your way down a rocky outcrop is good fun, and challenging. So too is plugging away through three, four, five inches of mud. Travelling at crawling speed because because your back wheel spins every time you push down on the pedals, both wheels sliding sideways unexpectedly, whilst trying to keep your balance.

It’s a good job I enjoy the mud plugging cross-country as well as the big hill stuff. In this part of the country there aren’t that many big hills.

Quote of the day: “There’s nothing like a mudbath to get rid of a new years day hangover, except bacon of course.”