When you buzz a cyclist, you risk ripping the heart out of a family. Denying a little girl her daddy, or stealing a son or daughter from a loving parent. Is it worth it?

Is sharing the road really that much of an inconvenience?

It’s because of this animosity that cyclists are so uppity. Cyclists don’t want to be at war with motorists. We just want to ride without the BS and grief that’s handed out to us daily.

There are of course douchebag cyclists. But there are also many many douchebag motorists that treat every interaction on the road as some sort of contest. For every cyclist you saw jump a light, think about all the drivers who cut you up at a junction, or rear up behind you on the outside lane when you’re overtaking a lorry at 70mph — aggressively looking to push you out of the way, or pressuring you to match their law-breaking speed. People are dicks… it’s not a matter of dick-cyclists or dick-drivers.

Exactly. Although I’m probably the dick gesticulating behind my steering wheel in your mirror to get out the fucking way, I am also a cyclist. I don’t ride much on the road at the moment but it does fuck me off that the standard response by car drivers to cyclists is… 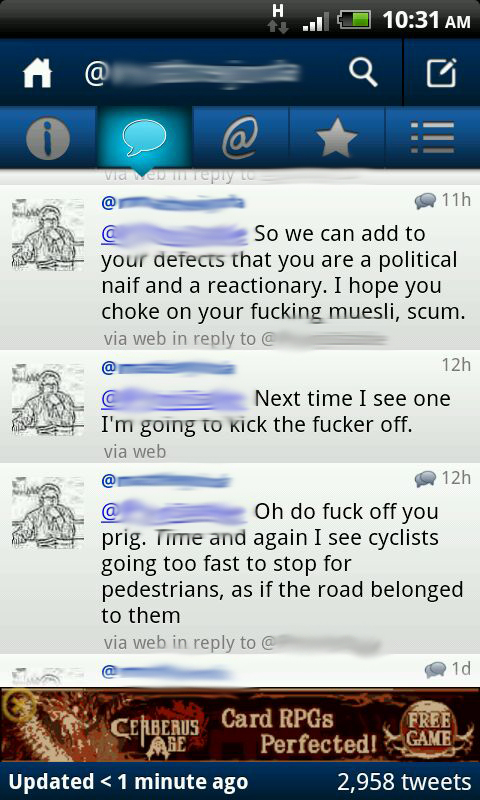 What exact privileges do you think being a driver gives you?

You sat a couple of short tests that “prove” that you have some basic control of a vehicle and a passing familiarity with the highway code. Then you’re allowed to operate a tonne of steal at speeds where if you hit another human being, he or she is near vaporised. Bicycle on pedestrian fatalities are rare. Bicycle on driver fatalities are near impossible.

So after sitting a ridiculously easy driving test, do you really expect a cyclist to sit a similar test? Tell you what… I will happily support compulsory cycling proficiency testing, if drivers are subject to the sort of testing that weeds out bad drivers, and ensures only the most “proficient” drivers are allowed to use the roads.

Let’s be generous and say that the driving exams are only once every 3-years. I mean, you’re operating a potential killing machine… we need to be super careful, no? We all want safe and efficient roads, yes?

Can I go one step further, and drivers have to spend a year or two on two wheels, both types, pedal and engine, before being allowed into something with four wheels. That might give car drivers a view on exactly how scary it is when a car driver traps your front wheel between their back wheel and the kerb.

Maybe then, the road might be shared a little more fairly.